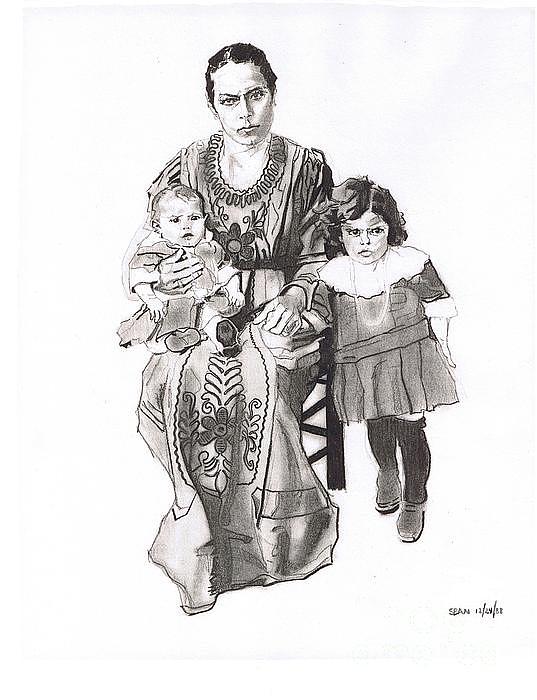 This original drawing is currently for sale.   At the present time, originals are not offered for sale through the Sean Connolly - Website secure checkout system.   Please contact the artist directly to inquire about purchasing this original.


. . A brief history in time - Sicily, circa 1915:
Matriarch of my wife's family, this is her grandmother Maria at approximately age 3 with her mother and baby sister.
She survived a hard-knock childhood, as her mother and sister both shortly after died and she grew up in a tough Sicilian orphanage.
At age 18 she finally left that place.
Her father, who had since moved to, and remarried here in America, sent for her.
With a deathly fear of water, and without knowing a soul onboard, she alone sailed the Atlantic Ocean to the United States.
Met at Ellis Island by her father, she now lived with her NEW family in a NEW land in the North End of Boston.
Two years later she met the love of her life, got married, settled in East Boston, and begat a large, loving family which eventually begat the love of my own life.
Maria lived a long, happy life thereafter in that same Eastie triple-decker. She died on August 11, 2003 at the age of 91.


I drew this artwork for her as a Christmas present in 1988 - my meager attempt to thank her for her love (I got her seal of approval!),
my wife, and the phenomenal homemade soups she made for me that nourished my spirit as well as my belly.

She had a heart as big as the sky.
She had good, solid horse-sense.
She was the grandmother I never had.